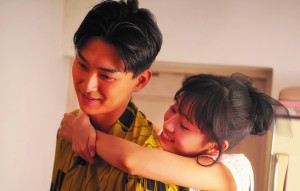 The Japanese Film Festival 2016 marked celebrations of the successful collaboration between the Embassy of Japan and access>CINEMA for the eighth year in a row.  Comprised of forty five screenings countrywide, the assortment was unveiled in locations at Dublin, Cork, Limerick, Sligo, Galway, Dundalk and Waterford. The diverse programme of twenty two multifarious films featured works from some of the most renowned directors in contemporary Japanese cinema.

Beginning as early as the 3rd April the festival kicked off in Cork city with a screening of Initiation Love イニシエーション・ラブat the Triskel Arts Centre. Directed by Yukihiko Tsutsumi and set in the 1980s, it depicts the headlong zealous affections of a young couple. Suzuki and Mayu find their eager relationship strained between the obstinate realities of life and their resolve to maintain a long distance relationship. The viewer is privy to their transforming relationship, as the film seeks to explore the fatigue of bonds when faced with overwhelming obstacles. From the opening the audience is warned about the surprise alternate ending, which differs from the original acclaimed novel by Kurumi Inui of the same name. Tsutsumi raises problematic questions regarding the expiration of a first love, the offbeat resolution haunting the viewer long after the credits roll.

The Dublin based leg of the festival took place between 13th and 21st of this month. One portion of the collection, The Case of Hana & Alice 花とアリス殺人事件, was screened in Light House Cinema on 16th April.The feature shadowedour protagonist Tetsuko (to be later nicknamed Alice) as she discoversmoving to a new town is never easy, especially when met with supernatural mysteries such as the ‘Judas murder’. From the opening Alice is confronted by numerous challenges despite best efforts to fit in at her new school. As a result she is compelled to investigate the strange legend, hoping to be accepted into the community by partaking it its superstitions. Drawn to her mysteriously withdrawn neighbour Hana whilst trying to source answers, we follow their high spirited investigation in this amiable prequel to Shunji’s 2004 flick. The director’s first rotoscoped animation is jovial from the opening, rounded with a heartening score and infectious curiosity.

Three Stories of Love 恋人たちwas released in 2015 by award winning director Ryosuke Hashiguchi, his first feature since All Around Us in 2008. Hashiguchi’s early work arguably paved the way for a new wave of independent filmmakers in the Japanese Film Industry. A director known particularly for his subject matter pertaining to the representation LGBT issues, most famously his work promotes the universality of emotion. The film was hailed as the best Japanese film of 2015 in the Kinema Junpo annual critics’ poll and was screened as part of the festival on 14th April. The audience is privy to the three distinct lives of Takashi, Atsushi and Toko later connected through their struggles to cope with tragedy. Taking his previous work as an example one quickly confirms that Hashiguchi is no stranger to the subject of loss straining a relationship. It forms an exploration into the significance of love within a life. The viewer follows this tripartite patchwork, from one man failing to cope with the senseless murder of his wife, a successful lawyer reasoning with the overwhelming impossibility of unrequited adoration, and finally a suppressed housewife navigating life around her emotionally apathetic husband.

The intensity imbued in emotionally charged objects alongside a sentimental attitude towards life is a common theme of Japanese cinema, as seen in Hashiguchi’s work. Early in the screening it is inferred that the notion of sinking or failing in daily life was to be the overarching theme. The feature plays on the voyeuristic aspect of human nature, meandering through a ream of unlikely pairings in both friendship and romance. The plot preys on the anxiety of the failed connection, working to emphasize the notion of one stranger’s unconscious effect on the life of another. Sensitive, vulnerable, with unavoidable realism; it breathes life into the theory of three degrees of separation.

This visceral and passionate account of life in contemporary Japan teaches the importance of recognition of other’s emotions, highlighting how we seek to distance ourselves from these expressive realities. Our three leads cross over in seeking serenity and contentedness, although their methods alternate between healing and harmful. These positive and negative forces are represented through the symbolic omnipresence of water and cigarettes throughout. Hashiguchi involves notions of performativity within society and the strain its fragmentation has on an individual. Following the three stories we are privy to the disparity between the internal self and the publically established self. Despite the difficult journey the viewer is left feeling hopeful, acknowledging the importance of humble bonds and simple pleasures “life is ok when you eat well and laugh”.

“I guess in the end it all comes down to the credibility of the story you’re trying to tell / I don’t believe in using confrontations like those as a means to suddenly force a change in a character. Those kinds of solutions don’t exist in real life either. It would become unbelievable if you wouldn’t leave some loose ends.”

Director Masakazu Sugita’s 2014 feature film Joy of Man’s Desiring 人の望みの喜びよsimilarly enunciates aspects of the individual human experience within an overwhelming world. Sugita himself was a childhood survivor of the Great Hanshin Earthquake of 1995, and was incited to make the film following the Great East Japan Earthquake in 2011. This tender yet overwrought depiction examines the resilience of a sibling bond following the tragic death of their parents. Twelve year old Harun struggles with the manifestation of grief, renouncement of guilt and adjustment to the curious reality that life goes on. Her distress is heightened as the kindly aunt and uncle who adopted the children choose to withhold knowledge of their death from her younger brother Shota, vying to preserve his innocence. In tandem Sugita’s feature is distanced from the fragmented imagery associated with the crisis of natural disaster, opting instead for a more subdued slant.

A great deal of the pleasure one extracts from a festival such as this, as with many subtitled features, is the access to an alternative filmic scope. Something to relish, it presents the English speaker with a certain familiarization of significant aspects of contemporary Japanese culture. Additionally we can look much forward to the next festival instalment, with 2017 marking the 60thanniversary of diplomatic relations between the countries.