Fragmented Notions in ‘The Hopeless End of a Great Dream’ 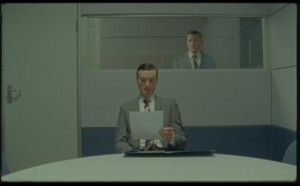 The Hopeless End of a Great Dream is the new 16mm film commissioned by Irish artist Declan Clarke and freshly exhibited at Temple Bar Gallery + Studios. The greatly anticipated project benefited from the support of Belfast Exposed, Centre Cultural Irlandais Paris and Trinity Creative, and was additionally backed by the Arts Council project award 2016. The feature previewed initially at the Edmund Burke Theatre in Trinity College Dublin on the 20th of April.

Declan Clarke, who was born in Dublin in 1974, conducted his studies at National College of Art and Design Dublin and Chelsea College of Arts in London.During his career Clarkehasincorporated a range of varying media in his art, however film retains an established presence within his excursions.Largely his work seeks to pepper instances of formative grand narratives with experiential snippets from everyday life.His contemporary work includes notable exhibitions in various spaces of Dublin, such as Wreckage in May last year at the Hugh Lane, and Group Portrait with Explosives at Mother’s Tankstation in 2014. Additionally his work, both collaborative and solo projects, has reached the far corners of the globe through galleries and film festivals in London, Leipzig, Berlin, Lisbon and New York.

Experiencing The Hopeless End of a Great Dream involves the movement from the bustling square of Temple Bar through to a subdued exhibition room lined with photographs. This further leads to the screening area where the same external activity is subsequently incorporated in the opening of the film. Notably the feature is shot exclusively on the grounds of the Trinity College. The traditional aesthetic of the architecture invokes a full bodied sense of importance regarding the significance of the past. Throughout the film is immersive whilst appealing to voyeuristic tendencies. There is a sense that the viewing of the incidents portrayed is accidental, like tuning in to a forgotten radio wave. The audience is privy to several paralleled threads which contribute to the curation of its fragmented nature, invoking some disorientation as it references instances from past history in Ireland. However due to the presentation of these extracts in their contemporary setting, the film succeeds in blurring aspects of past and present alongside reality and legend.

From the beginning the viewer is immersed in a series of empty spaces, a ream of controlled presences and reinforced quietude. These thematic choices parallel the nature of the viewing space itself. The character’s movements are reminiscent of a culturally inscribed social choreography, reinforcing the notion of catalytic events in Irish history. It is important to note the distinct lack of music in the film, meaning that the characters must carve out atmospheric presence for themselves. The shifting points of view in the feature are suggestive of varying degrees of interest, perhaps in the mysteries of this country’s past. Truly mystery is the objective as the viewer cannot help but seek connections between the several stories, constantly questioning what exactly this film is trying to communicate “If this is all starting to sound like something penned by Ian Fleming, that is no mistake”.

The potency of the film is reinforced by its methodical approach, the crux of the feature is presented alluringly like a secret folded in and in on itself. Just as there is a precise significance to every image captured on the film, each object has a charged presence. One such weighty example of these charged objects are the photographs, which serve as prompts throughout and mirror those exhibited in the main hall of the gallery. To create substantial space for these indicted items the speech included in the feature is sporadic, imbibing that which is not being said with the most importance. Despite instances of silence, the information suggested is boundless. The audience is left feeling as if they had been pulled through history to confront contemporary Dublin, the notion is mirrored by the iconic closing sequence of one man pulling another through the halls of Trinity library.

In short the experience is fragmentary and provocative. Through to the prolonged shuffling of the concluding frames we are still curious as to whether we have understood all that was necessary from the viewing. Once faced with the credits the viewer must trust that they have absorbed the significant information. The lack of traditional closure heightens the clandestine notions shrouding aspects of Ireland’s past. The exhibition will continue until 18th June 2016, from there moving to spaces in Belfast and later Paris.